A novel tool towards the management of coccidial risk

Coccidiosis is the single most economically devastating disease in modern poultry production worldwide. The disease affects particularly younger birds and can spread rapidly between animals within the same flock after contact with infected droppings. The aetiology is pathogenic endoparasitic Eimeria species, in particular Eimeria maxima, E. acervulina and E. tenella and each of which affects distinct areas of the intestinal tract. Severe cases are characterized by macroscopic lesions due to the destruction of the intestinal epithelia, a series of immunological responses, reduced feed efficiency and even mortality. However, even subclinical coccidiosis (where birds are disease-free) is responsible for reduced profitability due to reduced feed efficiency and increased mortality. Equally important, subclinical coccidiosis can be a contributing factor to necrotic enteritis in broilers due to mucosal damage and Clostridium perfringens overgrowth, while incurring additional costs of disease intervention.

The addition of anticoccidials in feed has been, by far, the most popular coccidiosis prevention strategy in broiler production globally, for several decades now. Anticoccidials are classified in two categories, chemicals and ionophores. They are often applied using a wide variety of combinations and timings in, what is known as, rotation and shuttle programs. The purpose of these shuttle and rotation programs is to slow down the buildup of resistance by alternating between the different types of anticoccidials, vaccines and alternative products. Regardless, the ubiquitous use of anticoccidials in the broiler industry, sometimes without a single break within the same production unit for several years, has not surprisingly resulted in varying levels of resistance against all commercially used products.

Legislation around the classification and therefore, their application differs greatly between countries. For example, ionophores are classified as antibiotics in North America and as anticoccidials in the rest of the world. Additionally, the industry is globally shifting toward production without antibiotics and in certain markets like USA, ionophores may no longer be permitted. As such, a number of production programs like no antibiotics ever (NAE) in USA have been introduced to address consumer demand and the concerns of scientific communities with regards to the abuse of antibiotics. In North America, the use of ‘wild’ live-coccidiosis vaccines in such programs has been an alternative coccidiosis prevention strategy, aiming to infer immunity against the targeted Eimeria spp. However, their efficacy has often been criticized due to lack of uniformity between vaccine-batches and issues related to erratic vaccine-Eimeria cycling in the barn. In contrast, live-attenuated vaccines are used in Europe, again, with varying degrees of success. 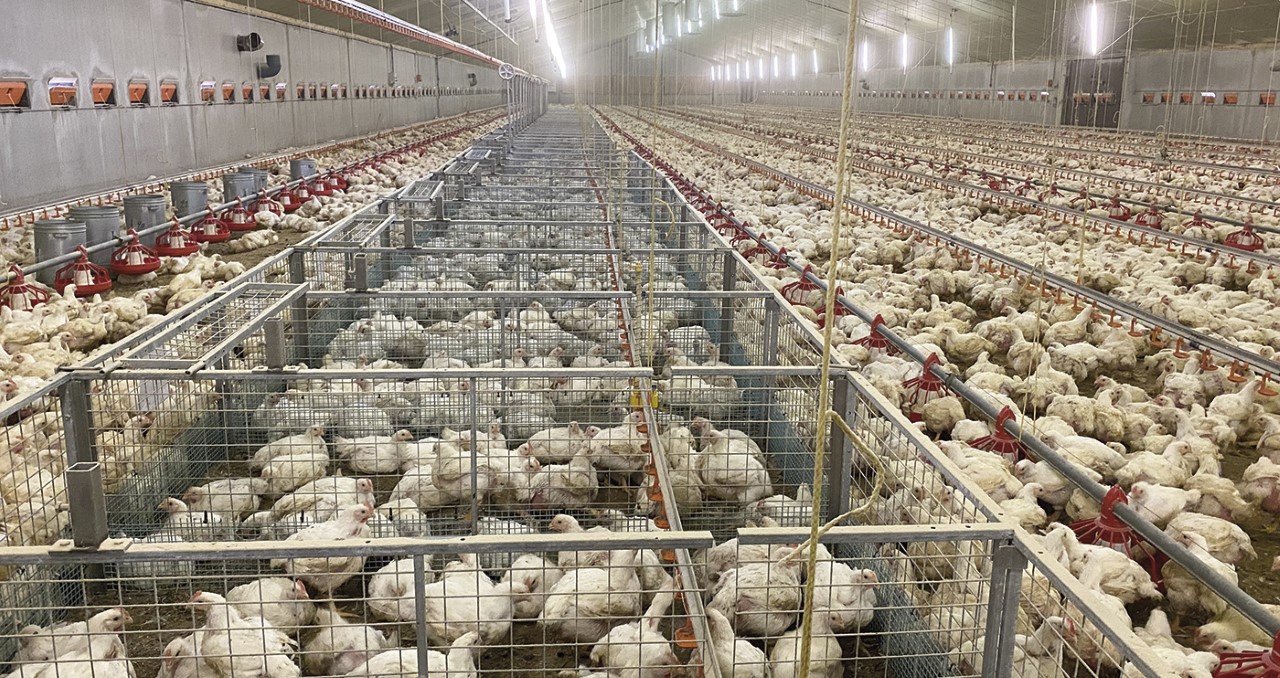 Innovad’s research experimental facilities inside a real production unit with 55,000 broilers where part of Aflocox' evaluation.

The ever-growing resistance to coccidiostats, the erratic efficacy of live ‘wild’ vaccines, the partial success of attenuated vaccines as well as the consumer demand for drug-free animal meat have increased the interest in natural alternatives for coccidiosis control. The poultry industry has embraced the introduction of medicinal herbs as part of an overall management toward coccidial risk.

‘One size does not fit all’ - A production-specific herbal approach

Reflecting the geographical coccidial-strategy differences explained above, Innovad have tested and created dedicated, 100% natural alternative technologies under the brand Aflocox. Namely, specific Technologies to match different production systems, as we believe that ‘one size does not fit all’. Principally, the Aflocoxrange incorporates the complexity and synergy of several phytochemical constituents that exert different and complementary modes of action. Plant-saponins are known for their anti-protozoal properties since they are natural detergents that can bind to the membrane cholesterol of protozoan cells.  Our technology range incorporates different sources of botanical-saponins that a) interfere with the Eimeria life cycle and, b) disrupt the Eimeria cell wall formation, offering thus, maximum efficiency against Eimeria spp. The technology is complemented by a repertoire of natural phenolics, flavonoids, terpenoids, alkaloids and carotenoids aiming to a) enhance the bird’s natural immunity, b) reduce its cellular oxidative stress and c) alleviate the exacerbation of inflammation, when encountering the parasites in real production conditions.

The Aflocox  range has been tested with great success both in European/Asian and USA context. Repeated experimental European trials inside the real production, demonstrated the successful replacement of a) synthetic and ionophore combinations during the critical period (day-1 to day-21 of age) by Aflocox Plus, and b) replacement of single ionophores during the least critical period (d22-d35) by Aflocox D (Fig. 1). 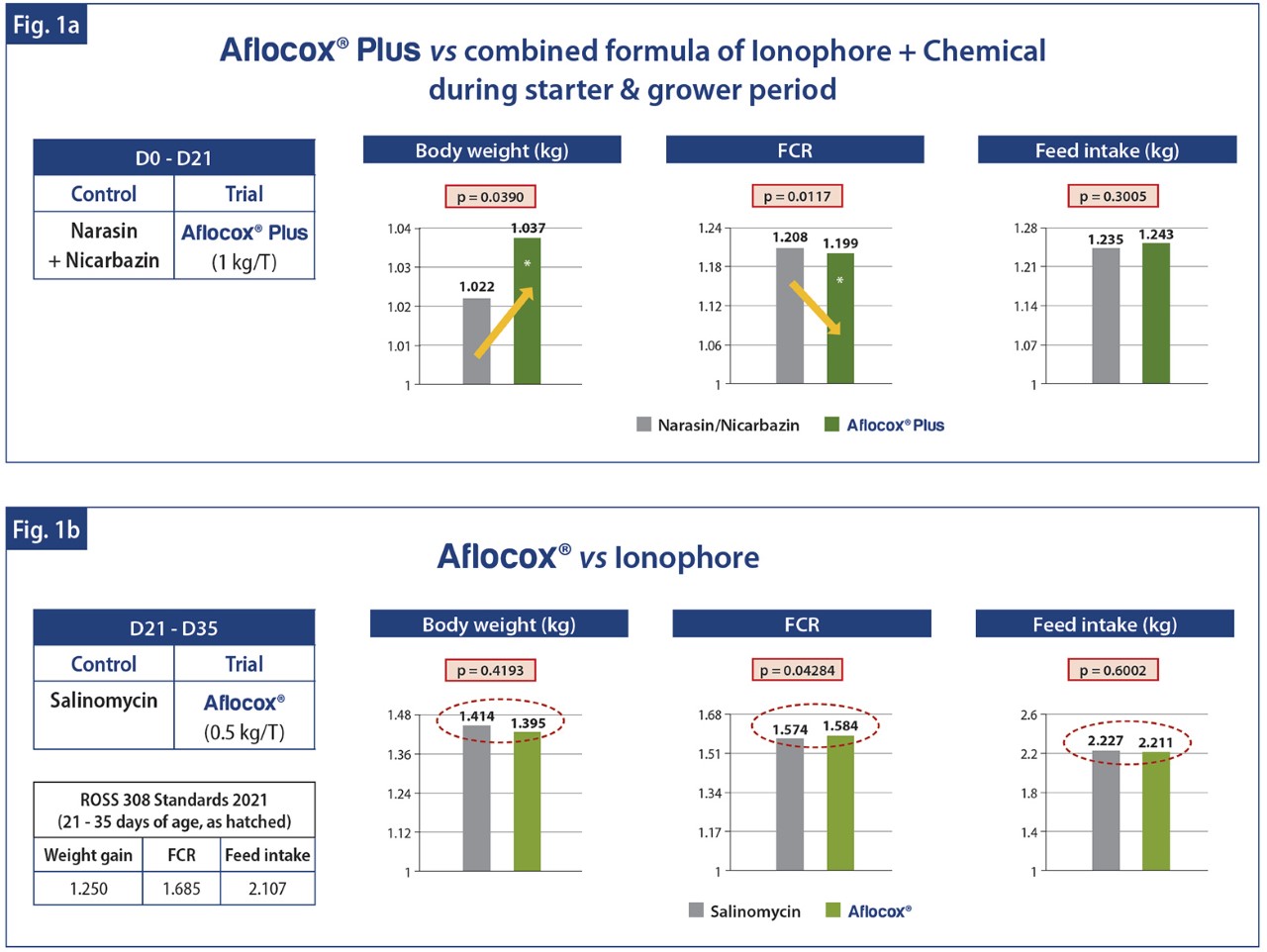 Similarly, experimental trials in Non-Antibiotic Ever (NAE) programs with top-15 USA producers, confirmed the advantageous growth promotion effect of Aflocox with the concomitant use of live ‘wild’ vaccines (Fig. 2). On one occasion  the technologyoutperformed the leading natural anti-coccidial brand (Fig. 2a) whereas, on another occasion, when a 20-times live ‘wild’ vaccines vaccine was used as a challenge,  the technology outperformed the best-performing (existing) program by 2 points of FCR (Fig. 2b). 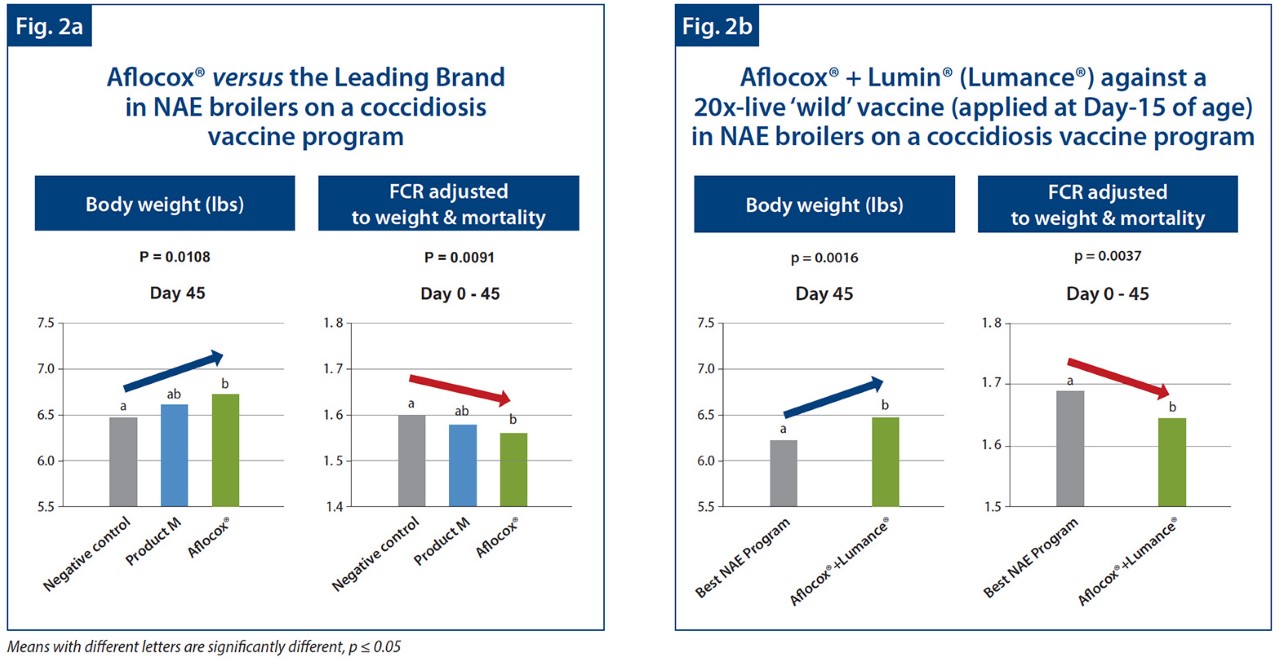 Coccidiosis is a burdensome challenge for the global poultry production and existing traditional coccidiosis prevention strategies encounter several challenges. The Aflocox® range is a novel tool towards the management of coccidial risk, taking into consideration the particulars of different production systems. It provides an alternative and can be part of a complementary approach towards the mitigation of coccidial risk, by harnessing the synergistic effect of selected plant bio-actives.

Talk to our Expert Inquiries
Dr. Christos Gougoulias
Director of Innovation Get in Touch