For over four years Innovad® researched together with Ghent University on the development of an in vivo testing method for mycotoxins. The result of this research is the RISE® Platform.

The first Asian webinar arranged to present the platform generated significant interest and with close to 200 participants from Nigeria to New Zealand it turned from an Asian event into a truly global one.

Five key learnings have emerged since the launch of the RISE® Platform that have relevance for animal producers across the globe.

Collectively they give what is probably the most accurate snapshot of the impact mycotoxins on any farm at a given point in time. Together with a thorough report a strategy is created together with Innovad® to manage the problem.

What is truly unique is that the blood spot analysis process is minimally invasive, easy to use and simple to send for analysis. Simply add up a drop of blood from five different individual animals from a population to a special card, let it dry, pop it in an envelope and send it to one of the independent labs for analysis. After two weeks you will receive a personal report of the mycotoxin threat level and a recommended strategy for combatting that threat on that farm.

So, what have we learnt that about mycotoxins in feed and more importantly
in animals that we did not know before?

1. Measuring for mycotoxins in feed alone is just not enough.

Since the implementation of the RISE® platform over 700 blood samples have been analysed. What is abundantly apparent is that feed sampling and analysis for mycotoxins alone is not in any way a sufficient basis to assess a mycotoxin threat. That is one of the reasons that the key speaker at the webinar Prof. Mathias Devreese, from Ghent University, pointed out that the European Food Safety Authority (EFSA) does not recognise any in vitro model for establishing efficacy of substances for mycotoxin feed contamination reduction. As such EFSA recommends using body fluids like blood, plasma, and milk as relevant endpoints for measuring the effect of substances for reducing mycotoxin contamination.

Data from the RISE® platform supports these findings in a way that has never been demonstrated before as 82% of mycotoxicosis would have been missed without blood analysis. The reason for this large discrepancy between what is detected in the feed and what is detected in the blood is the rather large margin for error in feed sampling. This can relate to both the type of mycotoxin i.e., do you hit the relatively isolated hotspots in the feed, but also to the development of moulds over time. Raw materials sampled at arrival that may have negligible levels could become high during storage. Especially in warm humid climates like South East Asia.

This was neatly demonstrated by Paul Coquelin, Innovad’s Technical Manager for Asia that showed three different field trails conducted in Vietnam. Consistent across all three trials was that there were significantly fewer mycotoxins found in the feed than in the blood.

2. Not all mycotoxins are metabolized equally across species.

In his presentation he showed for example that a mycotoxin like deoxynivalenol (DON) goes through a metabolic pathway in pigs that results in glucuronidation, but that this pathway has limited capacity. Whereas chickens have a sulfation pathway that results in a near complete neutralisation of DON, making the chicken virtually unsusceptible to this mycotoxin.

He went on to demonstrate that even with a single mycotoxin like zearalenone (ZEN) there can be different metabolic pathways within the same animal. Like in the chicken where ZEN can be metabolized to α-zearalenol (α-ZEL) which is an activated metabolite or mostly to β-zearalenol (β-ZEL) that is an inactive metabolite. Turkeys on the other hand preferentially produce α-ZEL making them generally more susceptible to ZEN.

3. Not all mycotoxin detoxification products are created equal.

During the webinar it was also demonstrated that there are not only are mycotoxins metabolized differently by different species, but there can also be significant differences between mycotoxin detoxification products.

This can give significantly differing effects in the animal as Prof. Devreese demonstrated by sharing a study where his group studied two commercially available detoxifiers that showed differing blood toxicokinetics.

Dr. Arnau Vidal, Product Manager Mycotoxins from Innovad, the main researcher behind the development of the RISE Platform as part of the PhD programme sponsored by Innovad together with Ghent University confirmed these findings. He has been able to demonstrate that Escent® S gave a 50% and 40% reduction in DON and aflatoxins (AFB1) respectively in poultry in the field. Similarly, he was able to demonstrate a significant reduction in ZEN and DON in a field study in pigs, even when the product was mistakenly dosed at one third of the recommended dose.

4. Co-exposure to several mycotoxins is more the rule than the exception.

Since the launch of the RISE® Platform a year ago now it has become very apparent that mycotoxins like company. While every sample tested contained at least one mycotoxin it is relatively rare to find only one mycotoxin in the blood (2%). In fact, on a global level 72% of blood samples show that animals are at a medium risk of exposure with four or more mycotoxins detected. The relevance of this is significant because feed analysis alone was conducted only 28% of cases would have been detected. Even then only one or two mycotoxins would have been detected and often at lower levels than are deemed problematic in the EU for example.

This was not more clearly demonstrated than by Paul Coquelin, Technical Manager Asia that showed a field case where a flock of breeders were showing clinical symptoms of toxicosis – liver and kidney problems, bacterial and necrotic enteritis, feathering problems and lower egg production on one feed (Feed 2), but not the other (Feed 1). 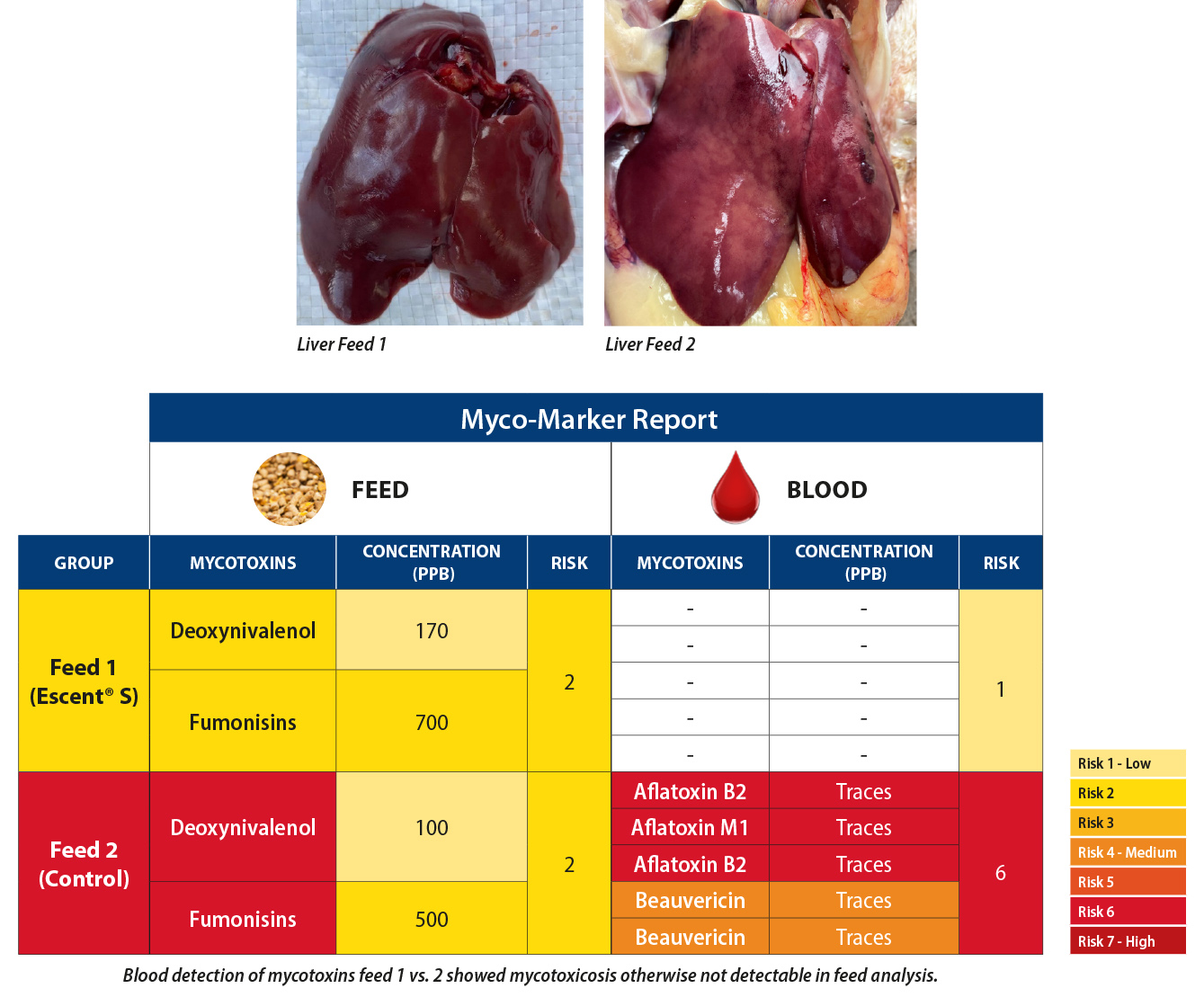 This trial also goes to demonstrate yet another very important principal that is often referred to in the literature which is that concurrent infection with several mycotoxins often has additive if not synergistic negative effects on the animal even at very low doses. This is particularly alarming in the AsiaPacific context considering that thus far all blood samples have 3 or more mycotoxins detected.

5. Emerging mycotoxins may pose a bigger threat than we realise.

While there is a wealth of knowledge surrounding the more common mycotoxins like DON, ZEN, aflatoxin, fumonisins, ochratoxins, etc. significantly less is known about the mycotoxins that are being detected by the RISE Platform. The so-called emerging mycotoxins are not new, they have probably always been there. Our ability to detect them has improved and therefore our knowledge about these toxins is ‘emerging’.

The techniques used by the RISE® Platform can detect 36 mycotoxins in the blood and 16 in the feed which is rapidly changing the picture of what we thought were the most relevant toxins for these species. Of the samples taken in Asia the top 5 isolated for swine and poultry only ZEN is well studied in swine and afla- and ochratoxins are well known in poultry. The remainder are less well studied.

It would seem that the toxins tenuazonic acid and alternariol from Alternaria spp. play a significantly larger role and it corroborates the observations from some recent feed surveys (Novak et al., 2019; Koshal et al., 2019) which also confirmed the massive detection of Alternaria toxins in swine feed. The extensive presence of Alternaria mycotoxins is of concern as they are described to induce relevant harmful effects in animals including fetotoxic and teratogenic effects. Furthermore, Alternaria mycotoxins have certain estrogenic activity as Zearalenone. Among Alternaria toxins, Tenuazonic acid is considered the most toxic (Asam & Rychlik, 2013) and many in vivo studies demonstrated that it causes severe effects as intestinal multi-haemorrhages or impairment of the liver and kidney.

The RISE® Platform from Innovad® is an innovative leap forward in measuring and managing mycotoxin related stress in our production animals. Already the dividends of the extensive research put into the project are starting to show for all parties involved in the value chain.

Over time this will become a valuable tool in improving the approach to managing mycotoxins, improving animal performance, and ultimately allowing for a more sustainable animal production with more resilient livestock better equipped to perform without the use of supporting medications.

For more information on how you can RISE to the mycotoxin challenge watch the full video of the webinar or contact us.