Improving the digestibility of a ruminant diet

A major part of ruminant diet contains fiber, but fiber is poorly digested and utilized. More than 80% of dietary protein and 90% of starch are digestible compared with only 50-80% of fiber. The fiber degradation is characterized by high variability depending on the type of fibrous material and the bacterial population. Knowing that 65% of the total energy of the cow should be covered by VFA produced by rumen fermentation, further optimization of fiber degradation is a constant challenge to high producing large cattle. Improving fiber digestibility will allow higher dry matter intakes and therefore energy intakes, ultimately allowing higher milk yields. Fibramax® improves your efficiency with a better fiber digestibility and stable rumen.

Kluyveromyces Marxianus-lactis – is a specie of yeast from the genus Kluyveromyces. From a commercial point of view it is a lactic fermenting yeast (or lactic yeast). Its main peculiarity is to produce enzymes (B-galactosidase, glycosidase, etc.). These enzymes show optimal activity at pH 6,5 and are stable till 45°c
temperature. The cell wall of this yeast is more resistant and thicker than S. Cerevisiae. We can thus expect a long lasting activity in the rumen. Such yeast is seen as a very quick selective starter of the fermentation process within the rumen.

Aspergillus oryzae – is one of the well known fungus worldwide. It is a strong producer of enzymes above all hydrolysing enzymes. Its main feature is a secretory enzyme ability. Related to ruminant nutrition A. Oryzae showed a strong action in increasing lactic acid uptake (30% more) by selected rumen microorganisms as Selenomonas ruminantium and Megasphera eldsdenii. This action allows controlling the rumen pH after feed ingestion avoiding rumen acidosis. Another characteristic is to improve the fungi population of the rumen. That means on one hand an increased break down of forage fiber and on another hand additional attachment sites for cellulolitic rumen bacteria. A.oryzae is generally known as a feed intake enhancer.

Studies carried out using artificial rumen (in vitro) showed a improving NDF degradation of forages by stimulating the key-fiber digesting bacteria activity resulting in higher acid production. In vivo studies conducted by IRTA in Spain and Schothorst in Holland showed an increased DM intake in lactating cows. An increased milk production during early lactation was observed as well. Feeding Fibramax® to cows early, mid and late lactation on dairy farm have shown an average increase in milk yield of about (1L/cow). 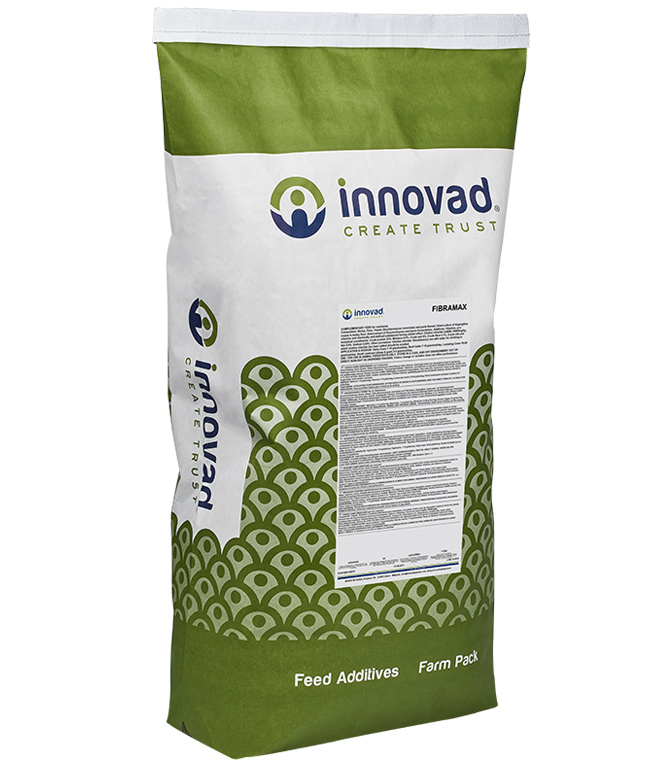