Global feed and raw materials surveys are reporting that animals are chronically exposed to a variety of mycotoxins. For this reason, these toxins are among the biggest concerns in food animal production worldwide causing adverse health effects and an unavoidable huge economic impact. Therefore, it is of crucial importance to establish reliable strategies to elucidate the real exposure. Up to now, feed analysis has been the main tool to monitor the mycotoxin exposure in animals. However, it is generally accepted that these analyses have many uncertainties. For example, the large heterogeneity of the mycotoxin distribution in the feed bulk causes large sampling error and the impossibility to take representative samples. These limitations lead to high underestimation of the true risk of mycotoxins to animals. The last years, scientific community proposed mycotoxin biomarker analysis as the effective tool to assess accurately and precisely the mycotoxin threat.

Innovad in collaboration with Ghent University (Belgium) conducted research that validated the detection of 36 mycotoxin biomarkers in the bloodstream using FTA cards (Lauwers et al., 2019). The validated method offers the possibility, in an easy system, to measure for the first time the impact on animal health and performance.

Multi-mycotoxin exposure is the norm

The blood analysis has been successfully introduced in more than 20 countries around the globe. Only in Asia, more than 400 animals have already been analysed in combination with feed. First results confirmed that exposure to multi-mycotoxins is the norm. Hence, all the evaluated Asian farms were exposed to three or more mycotoxins and what is more, 56% of them were exposed to 5 or more mycotoxins (Figure 1). Besides, Asian farms were exposed to a higher number of mycotoxins compared with other geographical regions (Figure 1). This could be expected as most of the Asian farms were in tropical countries (from south-east Asia) and the weather conditions from this area (high humidity and warm temperature) promotes mycotoxin production. The large multi-mycotoxin detected is of concern because it is well-known that multi-mycotoxin exposure leads to a synergistic or additive negative toxic effect on animals. In other terms, the toxic effect will be higher than the expected one.

It has also been confirmed that feed analysis alone does not provide a sufficient overview of the mycotoxin risk and it is continuously underestimating the real mycotoxin threat. Based on the results for feed alone, it might be concluded that the risks are relatively low/moderate. However, by also measuring mycotoxins in blood the overall risk can change quite dramatically as in almost 80% of the cases blood analysis could detect a mycotoxin risk completely missed in the feed analysis. For example, when a layer farm from north Asia was evaluated (Table 1), feed analysis identified 3 mycotoxins at low concentration, while blood could identify up to 7 different mycotoxin biomarkers. Even exposure to aflatoxin, the most toxic mycotoxin, was completely missed in feed and uncovered thanks to blood analysis (Table 1). These results confirmed the added value of analysing blood and the importance of controlling mycotoxin biomarkers to discover the real mycotoxin threat. 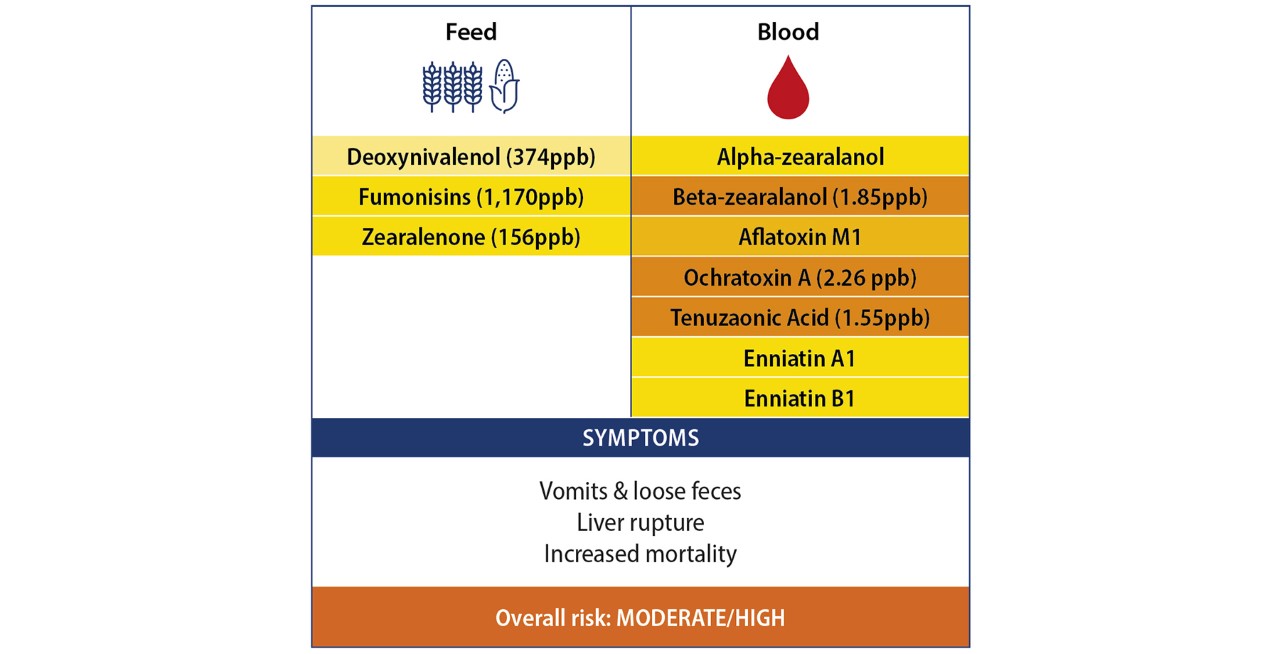 Recently the toxic impact of these emerging mycotoxins started to be investigated and all the new findings raise serious concerns about the harmful character of these mycotoxins. Most of the Alternaria mycotoxins are well known to have estrogenic activity as they are able to bind and activate estrogen receptors. In other words, they cause reproductive problems. This is relevant as up until recently it was generally believed that zearalenone was the only mycotoxin that can cause these types of symptoms. With regards to emerging Fusarium mycotoxins (enniatins and beauvericin), all studies reveal that they can exert a significant negative impact on intestinal tissues. For example, enniatin A1 was twice as toxic than deoxynivalenol in swine intestinal cells (IPEC-1) (Koshal et al., 2019). Importantly, the correlation between performance reduction and exposure to emerging mycotoxins has also been established. For example, one recent study reported that exposure to beauvericin and enniatins, even at low concentrations (considered safe levels and not causing any apparent symptoms), increased the feed conversion rate in broilers (Kolawole et al., 2020).

Mycotoxin biomarker analysis is, for the first time, possible to be applied in farms around the world thanks to the method validated by Innovad. The preliminary results have demonstrated that feed analysis have important limitations and blood analysis allows to detect the real impact caused by mycotoxin exposure. Therefore, mycotoxin biomarker is a crucial tool to understand the mycotoxin exposure properly and in improving the approach to managing mycotoxins, upgrading animal performance, and ultimately allowing for a more sustainable animal production with more resilient livestock better equipped to perform without the use of supporting medications. 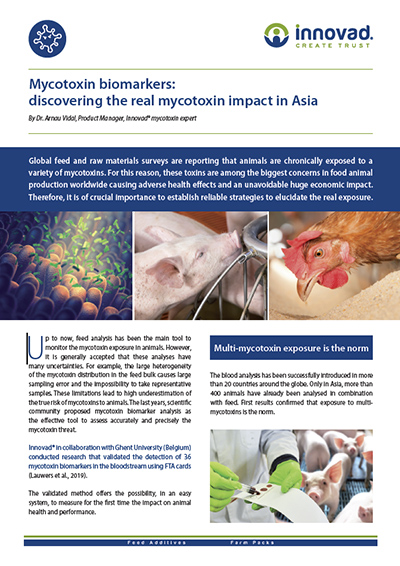 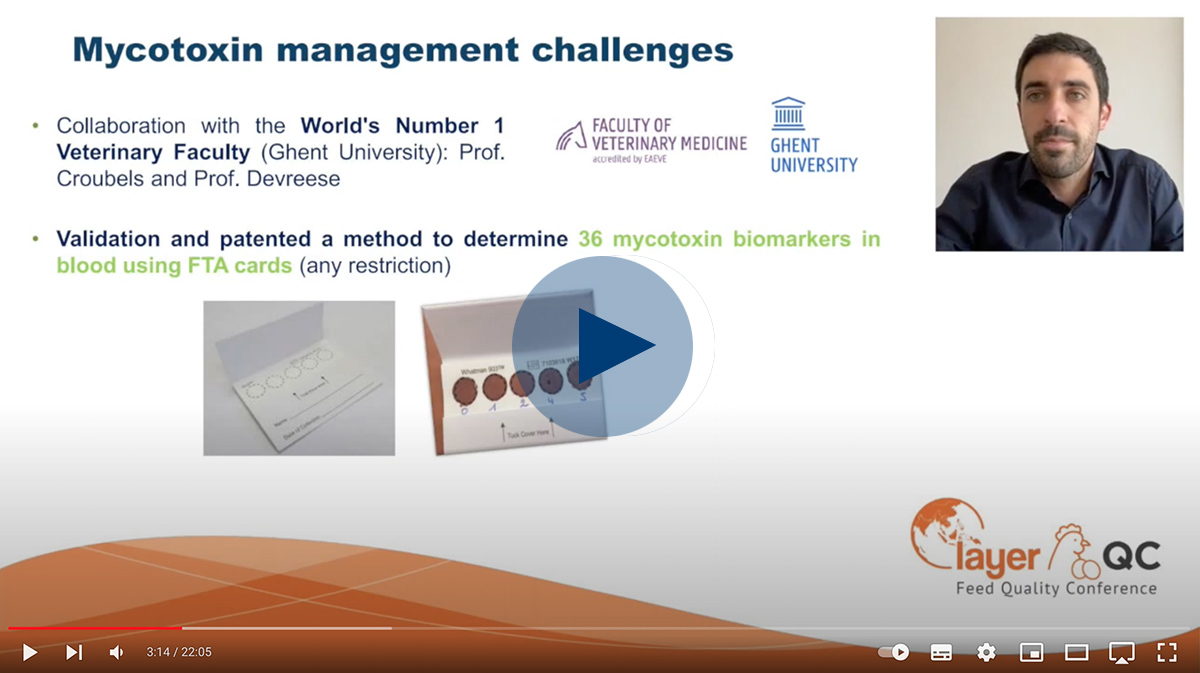 Talk to our expert Dr. Arnau Vidal to request the data for your region or read more about our patented mycotoxin biomonitoring service Myco-Marker®.