Animals possess a limited natural resistance and immunity against such stresses leading often to oxidative stress, when the animal is no longer capable of detoxifying timely the reactive oxygen species at cellular level. The impact of such stress factors is worsened and amplified in the presence of (myco)toxins:

Thus, we are in need of comprehensive technologies, with multiple modes of action and proven efficacy in vivo. Comprehensive technologies that can help the animal confront several stress factors under the prism of a concomitant mycotoxin exposure, even if the latter is considered low.  As such, Escent® S is a pioneering detoxifying and stress relieve technology that helps animals cope with both abiotic and biotic stressors via a multifaceted, holistic approach. 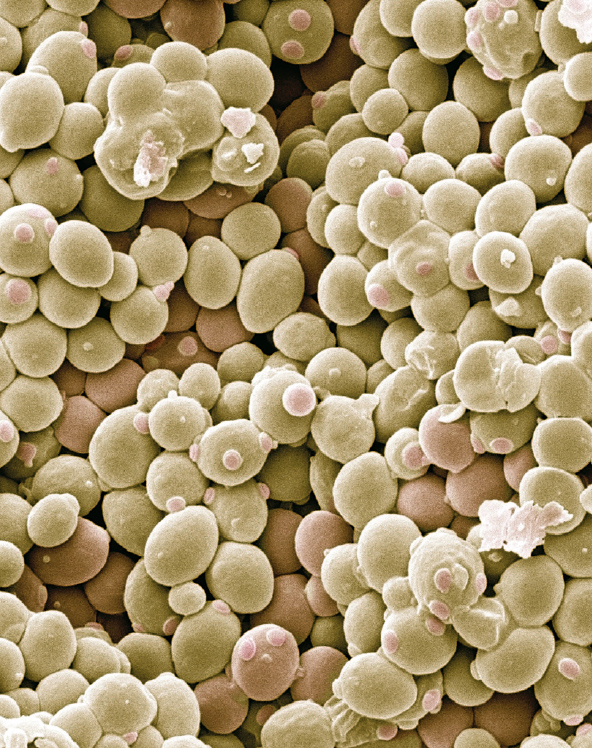 In today’s environment, the presence of mycotoxins is an inherent risk. Chances are high that multiple mycotoxigenic moulds such as Aspergillus, Fusarium and Penicillium and  their related toxins creep into silos and corn silage at harvest and after ensiling. A recent survey highlighted that 99% of grain samples collected contained mycotoxins and over 85% multiple mycotoxins.

More than 400 types of mycotoxins have been identified so far, also diverse in their chemistry and effect on animals. Feed contaminated with mycotoxins causes a broad spectrum of problems ranging from reduction in feed intake and growth performance to compromised reproduction, health and immunity. Symptoms are often non-specific and cost the agri-sector billions of dollars per annum. 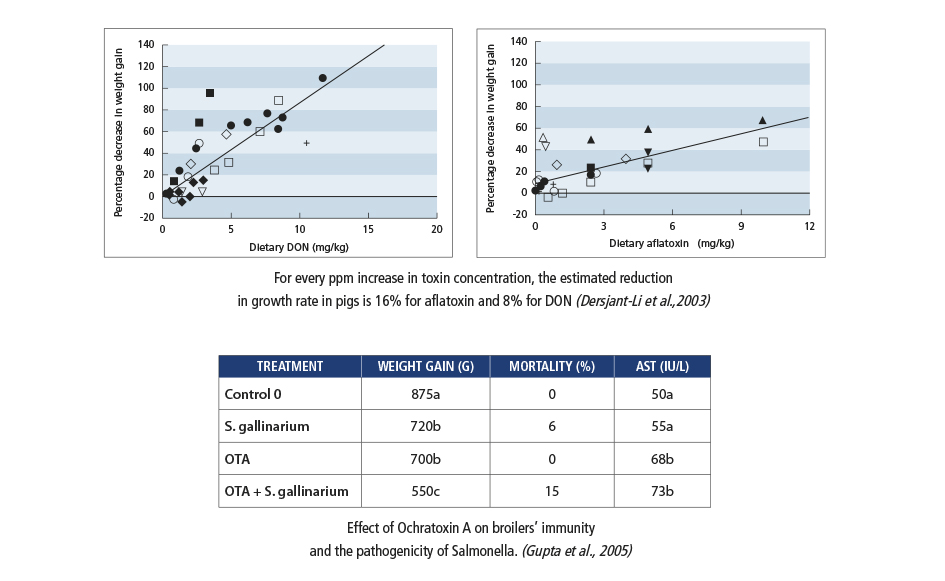 Feed dietary mycotoxins can also end up in animal products destined for human consumption such as milk, eggs and meat where they remain stable and inert toxic molecules.

Under normal conditions multiple-toxin contamination is likely. Multiple toxins can have a synergistic effect, increasing the negative impact on animal’s performance and health. Toxins from fungi combined with bacterial toxins increase the negative health issues significantly.

Mycotoxins may also occur in a conjugated form either soluble (masked mycotoxins) or incorporated onto/associated with/attached to macromolecules (bound mycotoxins).

Individual feed sampling and analysis although a critical factor is often overlooked due to the high cost and the relative long analysis time involved. Thus, this approach proves rather insufficient or uneconomical to proceed to a full risk evaluation. Therefore, prevention is the preferred option for an efficient approach. 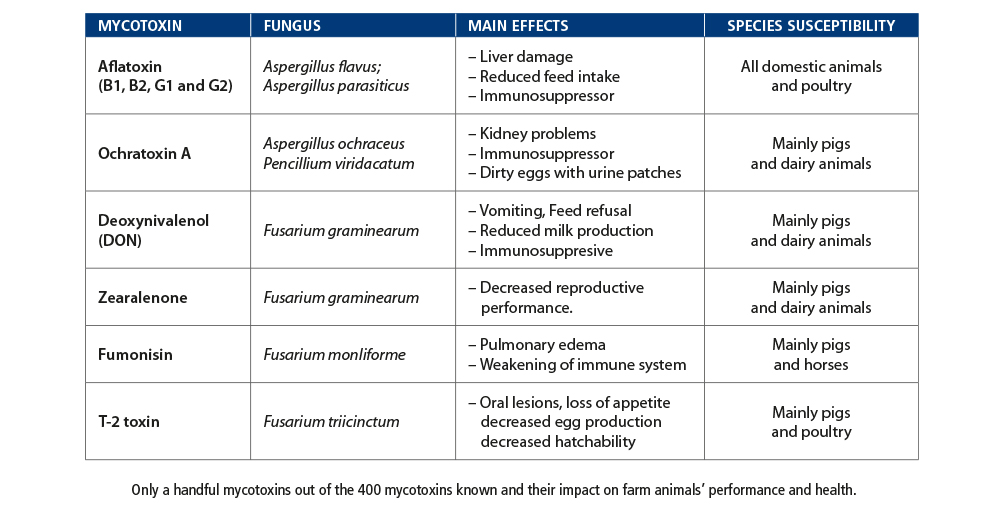 The first step to control mycotoxins is to evaluate the mycotoxin exposure. Although mycotoxin threat is widely present in all farms, there are limited tools to elucidate animal exposure to mycotoxins. Nowadays, feed analysis is the most common strategy implemented to describe the mycotoxin risk. However, recent scientific evidence suggests that identifying the mycotoxin threat from feed sampling is an imperfect science. For one thing, problems with collecting a representative sample, as well as the inconsistent distribution of mycotoxins through the feed, mean that it is difficult to be sure you have identified all the mycotoxins. Biomarker determination (mycotoxin analysis in blood) has been proposed as the successful method to assess the real exposure to mycotoxins. This inspired Innovad® to develop a more comprehensive mycotoxin testing concept complementing feed analysis with actual biomarkers in the blood of animals. This service is called Myco-Marker® and it helps industry to understand, for the first time, the real mycotoxin risk and optimize properly the mitigation strategy.

A new avenue to measure the impact of toxins on animals

Innovad has collaborated with the University of Ghent and is funding breakthrough research on novel ways to evaluate  the systemic impact of feed toxins and their intermediates on animals. This new research focuses on exposure assessment, as it is identifying novel biomarkers and is developing the appropriate analytical tools to determine toxic metabolites in animal biofluids. Such Biomonitoring  could provide us with more reliable data related to animal intoxication via contaminated feed and/or stress in situ Thus,  it has great potential for significant  economic impact in animal farming.

END_OF_DOCUMENT_TOKEN_TO_BE_REPLACED 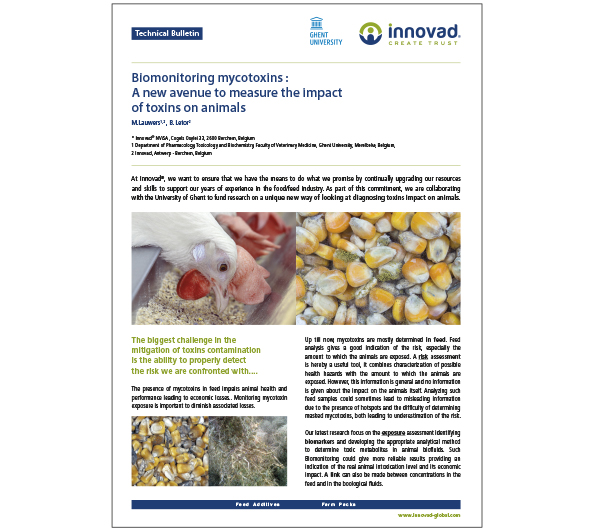 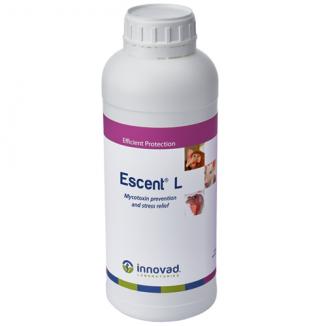 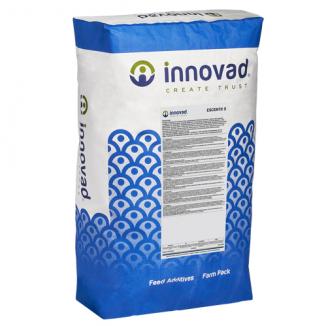